However, the NFL's plans for 1977 were thrown into disarray when the VFL announced they were withdrawing from the national competition to form their own rival night series, the Amco-Herald Cup. The series would be based at the League's headquarters, VFL Park with new light towers constructed specifically for the event at a cost of a million dollars.

Live telecasts of the rival competitions went head-to-head from 7:30pm each Tuesday night with the VFL series broadcast nationally on the Seven network and the NFL series on the ATV-0 network.
TEAMS / FORMAT

The original VFL night series had been a consolation tournament featuring only the eight teams that missed the VFL finals* and was played in September/October. In contrast, the 1977 series featured all 12 clubs and was played mid-week throughout the VFL premiership season.

*(all but one series during the 1956-71 era was contested only by the bottom-8 sides of the season. The 1957 Night Series was the exception, featuring all 12 VFL clubs; with each of the top-4 sides moving to the night competition as their VFL Finals Series commitments ended)

A twelve-team competition meant only six teams would advance to the quarter finals instead of the required eight, so a 'lucky-loser' system was adopted.

This resulted in the two defeated teams from Round 1 with the highest percentage (St Kilda and North Melbourne) also advancing to the quarter-finals.

The quarter-finals draw was then determined by ladder position:

From the quarter-finals stage onward all matches were played on a knockout basis.

*Lights out, again! - During the curtain-raiser played before the Carlton-Melbourne match on July 5th a ten-minute blackout occurred causing the match to be shortened. VFL officials feared another power failure like that of May 17th had occurred.

They were relieved to find the problem was merely due to a technician in the control booth accidentally knocking out the plug to their $1 million dollar lighting system. [The Age 6-7-1977]


*The 'Flying Doormat' goes berserk - Carlton's Bruce Doull was known as an unflappable defender who had calmly and consistently shut-down opposition forwards throughout the 1970s. That all changed when Hawthorn's Kevin Ablett ripped off Doull's trademark elastic headband and ran away with it in the 1977 night series Grand Final. The normally emotionless Doull went ballistic, charging after Ablett and swinging punches wildly.

It took six seasons until an opponent was game enough to try it again, with cheeky Essendon rover Tony Buhagiar stealing the headband during the 1983 VFL Elimination Final and throwing it into the crowd. This time a better-prepared Doull called his opponent's bluff, calmly reaching into his sock and producing another headband, much to the amusement of teammates and opponents alike. 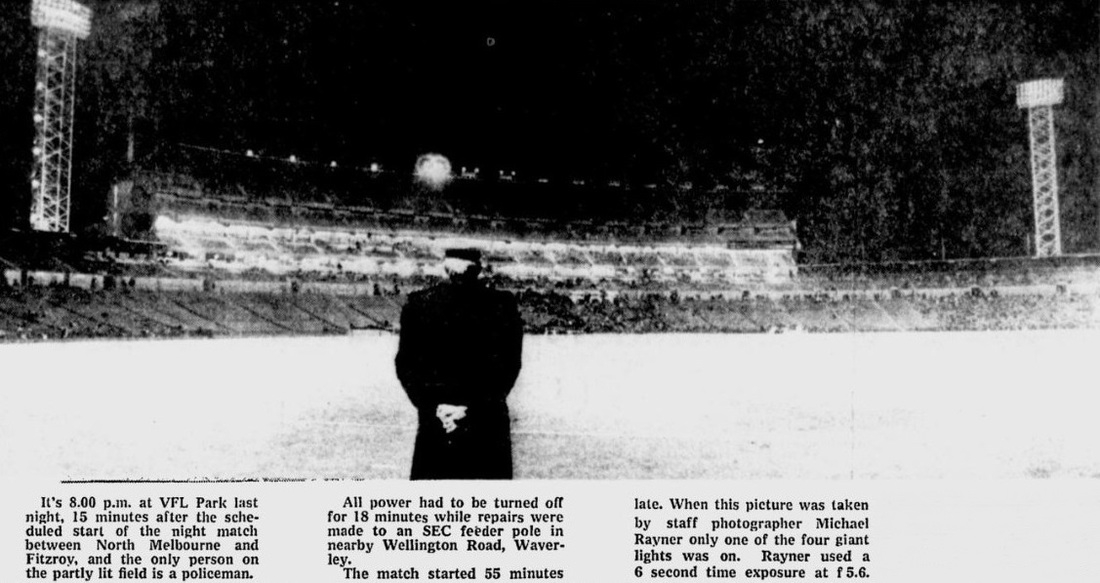 Listed below are match reports for all 13 games played during the series. This is the first time these reports have been collated and published online or in print. Unless otherwise noted the information was sourced from The Football Record and The Age newspaper.

*CROWD DISCREPANCY:
Carlton v
St Kilda
This match was originally scheduled to be played at VFL Park but was moved because the light towers were not completed.
North Melbourne v
Fitzroy
*The first night match to be played at VFL Park was delayed by 55 minutes due to a massive power failure. At 7:20 pm a fuse blew in an S.E.C. feeder pole in nearby Wellington Road, cutting a third of the power to the stadium's new lighting system.

Five minutes after the scheduled start time of 7:45 pm restless fans started jeering and slow-clapping, leading to an announcement over the public address system asking fans to be patient.

At 8:05 pm all power to the ground had to be cut-off so repairs could be made. Everyone at the ground sat in near-total darkness for the next 18 minutes with the only lighting provided by a back-up generator. Finally, at 8:40 pm night football's new era at Waverley made its belated debut. [The Age 18-5-1977]
Footscray v
South Melbourne
Geelong v
Hawthorn
Played in constant rain and freezing winds on Melbourne’s coldest day in 81 years.

Geelong's Kevin Sheehan reportedly tried to call out for the ball during the second half only to realise his jaw had locked due to the cold.
Melbourne v
Essendon
LADDER
*St Kilda and North Melbourne advanced to the next round as the two losing teams with the highest percentage.

The quarter-finals draw was determined by ladder position:

During the Herald Shield curtain-raiser a 10-minute blackout occurred causing the match to be shortened. VFL officials feared another power failure like that of May 17 had occurred.

They were relieved to find the problem was caused by a technician in the control booth accidentally knocking out the plug to their $1 million dollar lighting system! [The Age 6-7-1977]
Richmond v Fitzroy