(click on any image to see a full-sized version)

EVOLUTION OF THE JUMPER
From 1908 to 1949 there were no less than 18 different types of V worn by the Vics. In contrast, since 1950 there have been only two. ​Don't let the Big V down: click on the tabs below to discover more about the history of each design...

The Australasian [12-5-1887] reports: "The following will be the representative colours in the match next Saturday - Victoria: red, white and blue".

The Argus [20-5-1889] described the uniform as: "...motley royal blue and gold suggesting strongly the harlequin".

​The North Melbourne Advertiser's reporter was clearly not a fan of the new design:
​
​"The new uniform of which we heard so much as being a beautiful blue and gold, and which was soon to take with the public and especially attract the ladies, is an ugly combination of dirty yellow and light blue most peculiarly striped, reminding one very strongly of the antics of a circus clown".[18-5-1889]

"The remarks made last week regarding the Victorian uniform were fully borne out upon the team making their appearance on the field. the general opinion being that the newly adopted costume was hideously ugly and entirely unsuitable". [25-5-1889]

The South Australian Register [9-7-1890] was also favourable to the new uniform: "The Victorians, in their very pretty costume of royal blue jersey, hose, and cap, and a gold sash and white knickerbockers, were led into the field by their captain, and were well received".

The Argus [5-7-1890] incorrectly stated that the Victorians would wear dark knickerbockers to avoid a clash with South Australia's colours (red, white and blue) but correctly noted: "Although the colours blue and gold have of late been adopted as the colours of the colony for intercolonial football, every year finds a variation in the method of wearing them". This continued to be the case throughout the 1890s.
July 10, 1890 vs South Australia (not shown)
​
Played midweek, this match would have been an absolute shambles for spectators and players alike. The South Australians again wore their red, white and blue uniforms but, for reasons unknown, the Victorians took to the field with each player wearing his own club uniform instead of the new state jumpers.

The Argus [11-7-1890] reports: "The jumble of colours - each man playing in his own club colours, with the exception of the white knickerbockers - had rather confused the Victorians, and several times they had managed in this way to give little marks to the wrong men".

To put this in perspective, here is a description of the various VFA club colours on display in this match:

September 24 - VFA vs Essendon (not shown)

An end-of-season exhibition match between Essendon (the 1894 VFA Premiers) and a representative team comprised of players from the other VFA clubs (except Geelong).

The players on the representative team wore their own club uniforms, leading to a number of turnovers throughout the match.
1899

As far back as 1893 it is common in Victorian team photographs to see two or three players wearing their sash the "wrong" way compared to their teammates.

However, images from this 1903 match at the MCG show the entire team wore their sash inverted, on their right shoulder instead of the left.

However, season 1906 saw the introduction of a special jumper for the league's representative team, with the letters "VFL" added to the front of the navy blue state jumpers worn the previous year.
1908

After the 1908 carnival the South Australians returned to their annual contests against the VFA and, as had been the case in 1897-98 and 1906-07, the VFL were left to play representative matches instead of interstate football.

It remains unknown what uniform was worn by the VFL in these matches.

No representative or interstate matches were held in 1910.

This was the only time this occurred in VFL history outside of the First and Second World War years when league football was played on a restricted basis.
1911

In 1911 Victoria adopted a new, much more prominent V on the jumper front and wore small numbers on the back of their jumpers for the first time.

The wearing of numbers by all teams was a unique feature of the second Australian football championships.  To this point in the game's history they had only been trialled on a handful of occasions:
Later in 1911 the VFL clubs adopted numbers during their finals series. By 1912 numbers had become a standard part of club and representative uniforms. 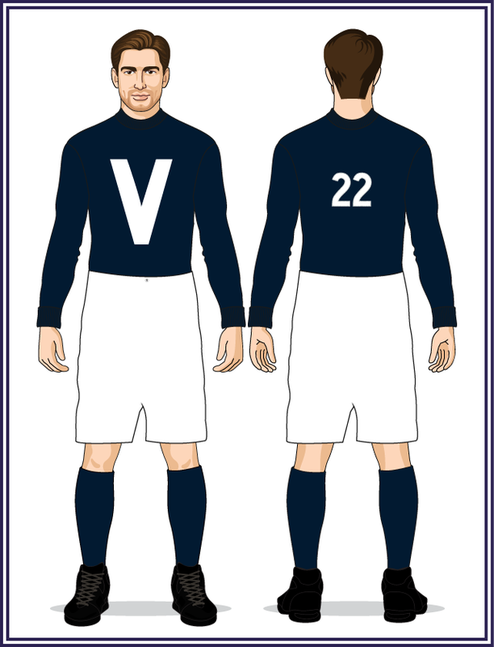 The V was the same size on the jumper as in 1911 but much wider at the top.

The numbers on the Victorian jumpers also went from very small to oversized, similar to those worn by all VFL clubs from the start of the 1912 season. 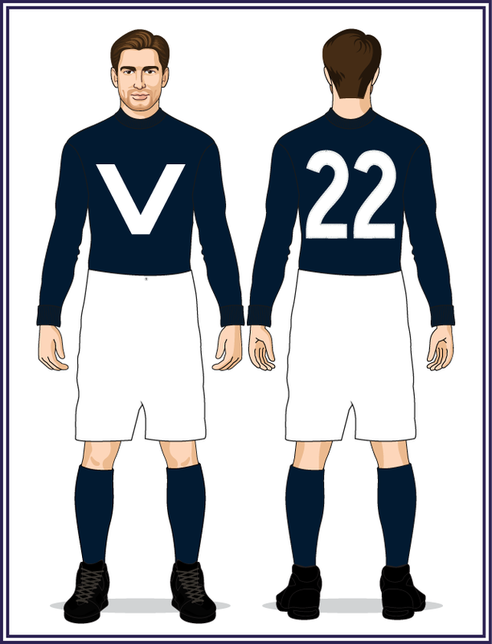 Following World War I another new V was introduced. It was basically the same shape as today's V, minus the serifs at the top. The design was worn throughout the 1919-1923 period, with two exceptions noted below.

A number of players during this era wore a V which was not the same as the official version. This was due to the poor production techniques of the period with the material being cut, positioned and sewn by hand which resulted in a number of such oddities.

While Victoria's 'A' team was away at the Perth National Carnival, Victoria's 'B' team played two matches against their South Australian equivalent, known as the South Australia 2nd XVIII. The V worn on this Victorian team's jumper was noticeably smaller than that on the other state jumpers during this period.

At the Adelaide carnival the V was noticeably smaller and higher on the jumper than before.

This was also the only time in Victoria's history they wore black numbers on a number panel instead of their usual white numbers sewn directly to the back of the jumper.

This game was one of only a handful post-1905 in which the Victorian team wore coloured shorts instead of their traditional white shorts.

When these teams met again in 1934 the league had returned to white shorts for all matches, regardless of the opponent; forcing the VFA to wear their non-traditional black shorts in future contests between the two sides.
1933

In 1945 wartime rationing on a number of materials continued, even after hostilities had ceased, and these restrictions prevented the SANFL from producing new state jumpers for their matches against Victoria that year.

The South Australians were forced to search for a similar design to their traditional state strip, eventually borrowing North Adelaide's jumpers which were red with a white V extending from the top of the shoulders to the centre of the jumper.

That design seems to have been the inspiration for the Victorian jumper worn in seasons 1946 and 1947.

As they had done many times before, Victoria chose to debut their latest design at the national championships.

This V was a modified version of the 1930's semi-modern V but smaller (the same size as the 1948-49 version), and with straight-edged serifs, instead of the earlier serifs with curved edges (refer to the 1931 tab at left for a comparison).

This is the classic Big V that continues to be worn today; it had taken over forty years and 18 different types of V but the Victorian jumper designers had finally found their winner!

Western Australia had switched from their traditional gold jumpers to a black jumper in 1958 and preferred to pair their new design with white shorts when playing away. As a result, Victoria wore black shorts for their home games against Western Australia in 1962 and 1964. This was the first time Victoria had worn coloured shorts since June 1932.

1967/1973 vs WA (right)
The dark shorts policy continued for Victoria's home games against Western Australia at the MCG in 1967 and Waverley Park in 1973. However, for these games the Vics changed to navy blue shorts; a rarity in an era when football shorts were either black or white (South Australia's State team were the only other notable exception at this time, having worn navy blue shorts since 1925).

In 1976 the VFL's marketing department introduced a league logo for all club jumpers; the State team quickly followed suit, adding the VFL shield to their jumper, shorts and socks that same year. This was the first logo patch of any sort to be worn on the Victorian uniform.​​

Sponsorship patches first appeared on VFL club jumpers in 1977. Although the Victorian representative team had been officially sponsored as early as 1980 (by Statewide Insurance) the jumper itself remained free of sponsor logos until 1986 when the addition of a Foster's Lager patch dragged the state uniform into the modern era.
​

Click on the tabs below to discover more about the history of each design...