The 1976 series was planned as a forerunner to a full-scale national competition in 1977 that would feature all the VFL, SANFL and WANFL teams plus representative teams from Tasmania, Queensland, New South Wales and the ACT. [Canberra Times, 15-4-1976]

The 1976 Wills Cup featured the top teams from Australia's three major leagues, ranked by their placings in the 1975 premiership season:

*NOTE - the NFL's original plan was for the VFL's top five clubs of 1975 to participate in the series.

However, Collingwood (5th) declined the NFL's invitation.
Their spot was offered to St Kilda (6th) who also chose not to participate.
This allowed Footscray (7th) to make their debut on the national stage.

The 12 teams were divided into four groups of three with each group playing a round robin during the preliminary stages:
The four group winners then contested the semi finals:

ROUND 1 - CARLTON vs SOUTH FREMANTLE
Carlton rested nine of its regular senior players including Jesaulenko, Southby, Jackson, Jones and Walls, but still annihilated their WAFL opponents by 125 points. Sixteen-year old Jim Buckley kicked 6 goals on debut for the Blues.


ROUND 2 - NORWOOD vs CARLTON
After experiencing such success in the first round with what was little more than a reserves team, Carlton arrived in Adelaide without 11 members of their senior team... and minus their coach!

This time the Blues paid a heavy price for underestimating their opponents, finishing on the wrong end of a 106 point thrashing.
This was an unprecedented margin of victory for any SANFL club against VFL opposition. Carlton's senior coach Ian Thorogood had chosen to stay in Melbourne due to "business pressures" and the side was coached by his assistant, Hugh Mitchell who had only been appointed six weeks earlier.


GRAND FINAL - HAWTHORN vs NORTH MELBOURNE
In what must surely have been a first for a top-level, in-season match of Australian football, both teams were led by assistant coaches rather than the senior coach. Hawthorn's assistant David Parkin had actually been in charge throughout the series in what amounted to an apprenticeship for a senior role (he officially took over the head coaching role from John Kennedy at the end of the season).

North Melbourne were led by assistant Ray 'Slug' Jordon due to head coach Ron Barassi's involvement in a serious car accident on the morning of the match. Barassi was recovering back in Victoria at the Geelong Hospital when his team took the field in Adelaide.


PLAYER OF THE MATCH
At the end of each match the player voted best on ground by football media covering the game received a Phillips colour television:

GRAHAM CORNES (Glenelg) was declared the B.S. Stillwell Ford Player of the Series after receiving 2 first preference votes and 1 second preference vote in the three matches he played. During half-time of the Grand Final he was presented with a Ford Cortina "valued at $5700". [NFL Program, 17-8-1976, p.11]
FOOTAGE

Listed below are match reports for all 15 games played during the series. This is the first time these reports have been collated and published online or in print.

ROUND 1
ROUND 2
ROUND 3
LADDER
SEMI FINALS
G.F. TEAMS
GRAND FINAL
ROUND 1

Both teams wore black jumpers with a gold sash so a coin toss was held to decide who would wear clash jumpers supplied by the NFL.

Richmond lost the toss and wore a gold jumper with red stripes and white numbers. This was worn with red socks and white shorts (see the EVENTS tab at the top of this page for an image of the clash jumper).
Port Adelaide vs Footscray
West Perth vs Hawthorn
Played on the Foundation Day public holiday.

Carlton vs                South Fremantle
Carlton was without 9 of its regular senior players including Jesaulenko, Southby and Walls.
Sixteen-year old Jim Buckley kicked 6 goals on debut for Carlton. 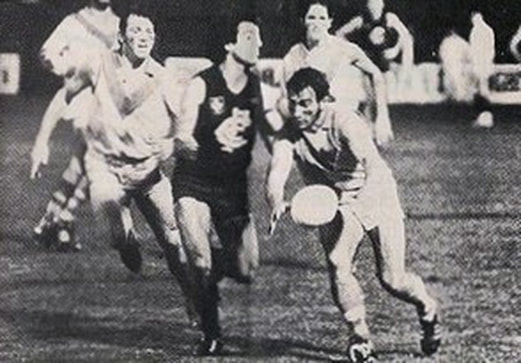 Port Adelaide vs North Melbourne
Norwood vs           Carlton
Carlton arrived in Adelaide with a stand-in coach and minus 11 of their regular senior players and paid a heavy price for underestimating their opponents.

Senior coach Ian Thorogood chose to stay in Melbourne due to "business pressures" and the side was coached by his assistant, Hugh Mitchell who had only been appointed six weeks earlier.