Relegation proved a one-way ticket to oblivion for clubs such as Northcote, Sunshine, Yarraville, Camberwell and Mordialloc who spent most of this era anchored in Second Division before folding during the 1980s.

In fact, Box Hill (24 seasons) and Werribee (20 seasons) are the only teams to spend most of the divisional era in the lower level and survive to the present day.

Second Division football has unfortunately been forgotten by most sources - even the VFA-VFL's Media Guide continues to omit these results - but whilst the standard of play deteriorated noticeably towards the end of the era, many great games and players featured in this period of VFA history and they deserve to be recognised.

NOTE - in the table above an asterisk (*) next to the crowd figure indicates more than one crowd total was published across various sources.
Click here for a list of all crowd figures published for each Grand Final. 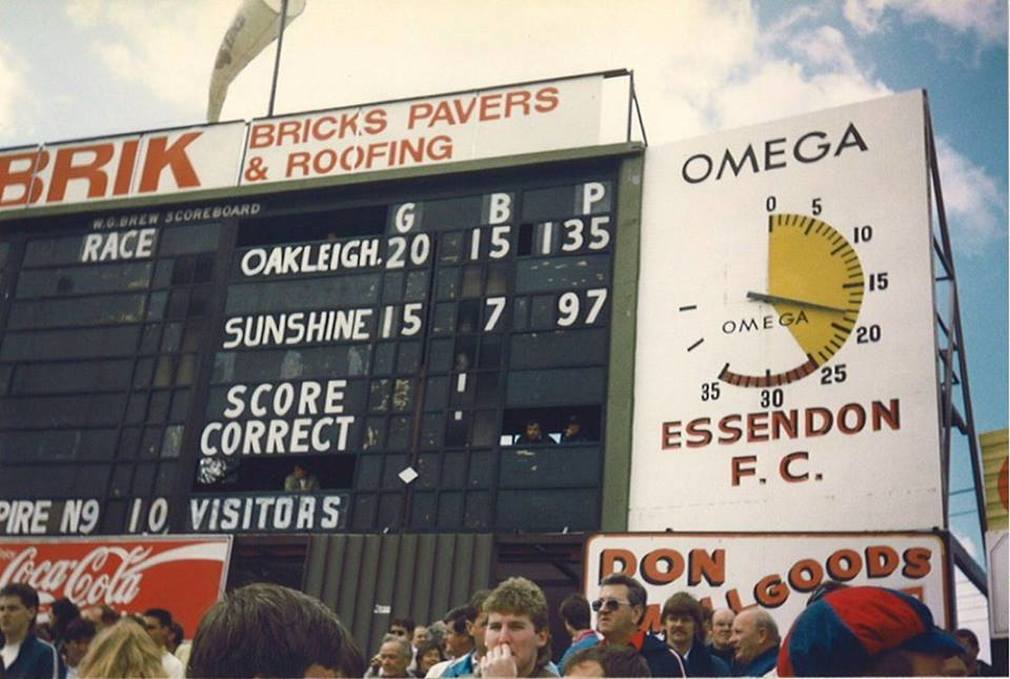 The end of an era - the scoreboard late in the 1988 Second Division Grand Final shows Oakleigh well on their way to winning the flag. This was the last Second Division match ever played [photo: Jeff Lawton & VFA Footy: The Halcyon Days]

1961 - Northcote won the inaugural Second Division Grand Final but it was to be a short-lived run of success. They lasted only two seasons in the top tier before being relegated after the 1963 season. They spent the next 25 seasons in Second Division before folding in 1987.

1962 - Dandenong earned promotion with a 60 point victory over Prahran. The match was marred by a brawl in the second quarter that lasted five minutes and involved 26 players. During the brawl the field umpire appeared to be struck and a boundary umpire was held in a headlock yet only one report was laid from the entire incident.

1963 - Preston entered the final quarter 24 points behind, but stormed home with the wind kicking 5.5 to 0.0 to snatch an 11 point win and their first VFA senior premiership. It was also the club's first VFA Grand Final since re-entering the Association in 1926.

1971 - Sunshine claimed their first, and only, VFA senior premiership.

1972 - Geelong West had qualified for the finals with an 18-0 record, three games clear of second-placed Caulfield. They scraped through the semi final stage, defeating Caulfield by just 5 points and faced Caulfield again in the Grand Final. They entered the last quarter two goals behind but rallied to win by 6 points. The victory gave them a 20-0 record and the VFA's first undefeated season since North Melbourne achieved the feat in 1918. The Sun [11-9-1972] reports that the gates had to be locked as a record crowd of 14,000 squeezed in to Toorak Park to watch the Grand Final.

1973 - Caulfield overcame the disappointment of the previous year to defeat Brunswick by 22 points. It was the Bear's first, and only, VFA premiership. The Sun [10-9-1973] reports that the Grand Final ground to a halt late in the final quarter when the football was kicked out of the stadium; the sixth lost ball of the match. There were no more replacements left so play stopped while officials searched the rooms for an old footy in suitable condition!

1975 - After missing their chance in three of the previous four seasons, Brunswick finally earned promotion; it was their first senior premiership since 1938.

1977 - Mordialloc had spent 15 of the 17 seasons of divisional football stuck in Second Division. Their only chances for promotion in that time had been in the 1965 and 1976 seasons but both games ended badly with losses of 38 and 57 points respectively. However, in 1977 the Bloodhounds, aided by 8 goals from Peter Neville, broke through for their only VFA premiership.

1978 - Frankston entered the VFA in 1966 but had never finished higher than third prior to 1978. They seized their first opportunity for promotion, winning their only VFA premiership by 14 points and remaining in First Division throughout the rest of the era. 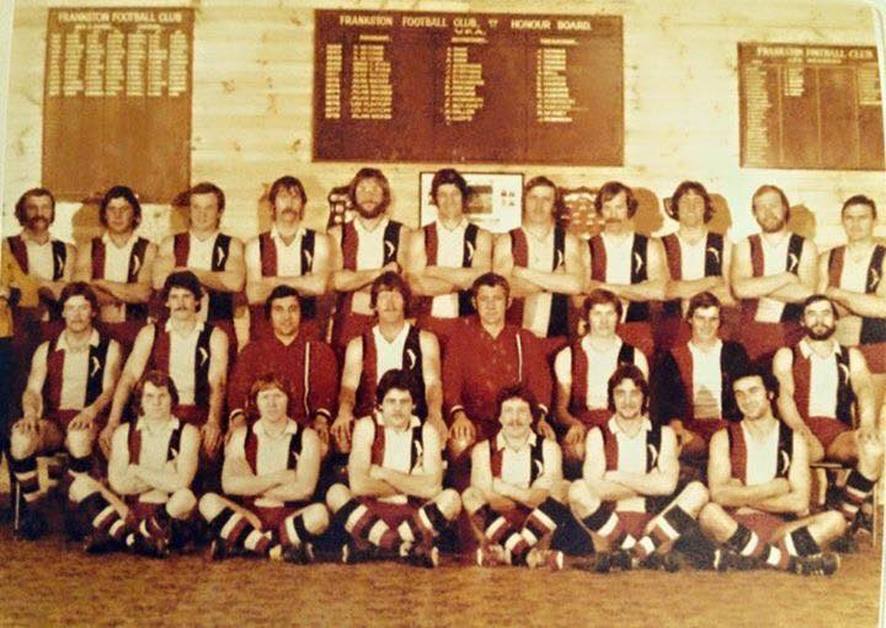 Frankston's drought-breaking 1978 premiership team [source: David Bullock/VFA Football: The Halcyon Days]
1979 - Camberwell had spent the entire divisional era in Second Division when they contested this match and despite entering the VFA in 1926 they had never won a Grand Final. The Cobras claimed their first VFA premiership with a 39 point win over Oakleigh. They struggled through the 1980 season and were relegated after just a single season in the top tier. However, they quickly bounced back to win the 1981 Second Division title, surviving five more years before being relegated once again.

1982 - A perennial cellar-dwellar, Northcote had spent 20 of the 22 seasons prior to this match mired in Second Division. Their highest finish in the previous decade had been 4th place in 1976. In fact, the club had only contested a single Grand Final since 1936: a 15 point win in the 1961 Second Division decider. So when the Dragons went goalless in the opening quarter and found themselves 30 points behind at half-time, a dream finish to a remarkable year seemed unlikely. Yet under the astute coaching of Colin Hobbs they kicked 7.4 in the third quarter to take a 2 point lead into the last term. In the final quarter they faced intense pressure from Caulfield but managed to hold on for a 5 point victory.

Unfortunately, there would be no fairytale finish to the story. Following the 1981 season the VFA had conducted a review of the divisional system which resulted in Werribee and Williamstown being promoted based on their potential, Caulfield being demoted due to financial issues and, crucially, no promotion or relegation in 1982 to allow these changes to take effect. The luckless Northcote were forced to remain in Second Division and slumped to 7th the following season. This was followed by finishes of 9th, 8th, 10th and 11th and a mere five years after their premiership season, the club ceased to exist.

1984 - Box Hill had been trapped in Second Division for 23 straight seasons and the only previous Grand Final in club history had been a 30 point loss in the 1970 decider. Every year between 1973 and 1981 the Mustangs finished in the bottom two but consecutive fifth place finishes in 1982-83 provided a launching pad for their assault on the 1984 premiership. They started strongly with 14 scoring shots to 5 in the opening quarter but wayward kicking kept the game alive. However, Oakleigh were powerless to stop the onslaught that followed as Box Hill went on a rampage, setting records for the highest score (32.23 - 215) and biggest winning margin (135 points) in VFA Grand Final history. Full-forward Dale Carroll also kicked 10 goals which was the second-highest individual total in a Grand Final.

1985 - Brunswick were fortunate to survive one of the most remarkable comebacks in VFA history. They were untroubled in the first half, leading by 33 points at quarter-time and 27 points at half-time but it was in the third quarter that they exploded. The margin blew out to as much as 82 points as the Magpies kicked 10.5 to 2.5, eventually taking a huge 75 point lead into the last break that had their fans celebrating early. Oakleigh were not prepared to concede though, storming home with 11.2 to 2.5 to fall just 24 points short of an improbable victory. Oakleigh's score of 22.12 (144) remains the highest losing score in VFA-VFL Grand Final history. Oakleigh's Rino Pretto also equalled the VFA record of 12 goals in a Grand Final, first achieved by Port Melbourne's Ted Freyer in the 1940 decider.

1988 - Both teams entered the final with plenty of motivation: Oakleigh's previous premiership had been in 1972, followed by a string of five Grand Final losses. Sunshine's only VFA premiership had been in 1971, followed by a single missed opportunity in 1986. Fourth-placed Sunshine proved no match for the minor premiers as Oakleigh cruised to a 50 point victory in what would be the last Second Division Grand Final.

Due to a number of clubs folding or leaving the Association, just six clubs had competed in Second Division in 1988. Following the season the VFA consolidated, scrapping the divisional system and reverting to a single competition between the remaining 15 teams. This was reduced further when Sunshine, just months after contesting the 1988 Second Division Grand Final, withdrew 8 games into the 1989 season due to financial difficulties.

CONSECUTIVE GRAND FINALS DURING THIS ERA