Rex's moment forever frozen in time (www.carltonfc.com.au / 14-2-2017)
The story of Carlton's Rex Job, whose sole senior game for the Blues was caught on film by a photographer from The Argus.

AFL revises the official attendances of 146 games, including twelve Grand Finals (Ashley Browne, www.afl.com.au / 18-12-2015)
Research by Trevor Ruddell and staff at the MCC library leads to a major adjustment of AFL historical records (here is a direct link to the modified attendances). 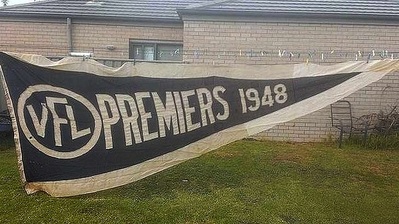 Melbourne's 1948 premiership flag that was discovered on eBay
The Cat of Two Names (www.geelongcats.com.au / 27-3-2015)
The mysterious tale of early 1900s Geelong footballer, Con Molan - a Cat with
two names.

History of the AFL could be turned on its head (The Age / 20-6-2014)
Caroline Wilson reveals the AFL's plans to officially recognise the history of the game in Victoria before the leading VFA clubs broke away to form the VFL.

Tracing forgotten stars of yesteryear. (The Age / 13-9-2013)
An interview with football historians Rob Pascoe and Mark Pennings who are compiling a database of Victoria's long-forgotten footballers who played in Victoria's top level competitions from 1858-1896; a project Pascoe describes as: "rescuing them from obscurity". 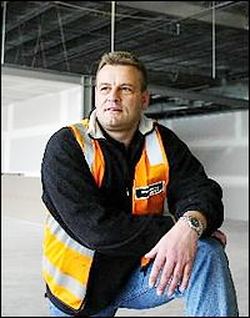 Former VFA champion, Rino Pretto (photo: Ray Kennedy)
Moorabbin FC - VFA Premiers in 1963, Dead in 1964 (Moorabbin-Kingston Leader / 18-6-2013)
A look at the incredible story of the Moorabbin Kangaroos: premiers of the VFA in 1963 then suspended from the competition the following pre-season. Within months the reigning premiers ceased to exist.

Early Days of Footy on the Record (The Age / 19-7-2012)
A preview of the MCC Library's exhibition celebrating the centenary of the VFL-AFL matchday programme, The Football Record.

Geelong President Colin Carter wants VFA flags counted to premiership tally. (Herald-Sun / 12-6-2011)
Colin Carter draws attention to one of football's greatest myths: that organised football in Victoria started in 1897 when the VFL was formed, completely ignoring the previous 20 seasons of VFA football that were dominated by the same clubs and players.

Silver anniversary of a goal achieved (The Age / 9-8-2003)
VFA goalkicking machine Rino Pretto reflects on his football career in this interview with Greg Baum.