(click on any image to see a full-sized version)

Click here to see the state uniforms worn by the VFL-AFL interstate team 1897-2008
NOTE - due to photographic development techniques widely used prior to the mid-1930s, the appearance of these dark jumpers
with light trim was often inverted in newspaper photos. This creates the illusion that these early VFA jumpers were gold with a blue sash. Click here to read more about this phenomenon.
EVOLUTION OF THE JUMPER
Today, after well over 100 seasons of play the VFA (renamed the VFL in 1996) currently sits on the second tier of Australian football, acting as a feeder competition for the national league (AFL). Their representative team plays annual matches against the other major State Leagues from around Australia - the SANFL, the WAFL, the TSL and the NEAFL.

Click the tabs below left to see the story behind each design...

The Australasian [12-5-1887] reports: "The following will be the representative colours in the match next Saturday - Victoria: red, white and blue".

The Argus [20-5-1889] described the uniform as: "...motley royal blue and gold suggesting strongly the harlequin".

​The North Melbourne Advertiser's reporter was clearly not a fan of the new design:
​
​"The new uniform of which we heard so much as being a beautiful blue and gold, and which was soon to take with the public and especially attract the ladies, is an ugly combination of dirty yellow and light blue most peculiarly striped, reminding one very strongly of the antics of a circus clown".[18-5-1889]

"The remarks made last week regarding the Victorian uniform were fully borne out upon the team making their appearance on the field. the general opinion being that the newly adopted costume was hideously ugly and entirely unsuitable". [25-5-1889]

The South Australian Register [9-7-1890] was also favourable to the new uniform: "The Victorians, in their very pretty costume of royal blue jersey, hose, and cap, and a gold sash and white knickerbockers, were led into the field by their captain, and were well received".

The Argus [5-7-1890] incorrectly stated that the Victorians would wear dark knickerbockers to avoid a clash with South Australia's colours (red, white and blue) but correctly noted: "Although the colours blue and gold have of late been adopted as the colours of the colony for intercolonial football, every year finds a variation in the method of wearing them". This continued to be the case throughout the 1890s.
July 10, 1890 vs South Australia (not shown)
​
Played midweek, this match would have been an absolute shambles for spectators and players alike. The South Australians again wore their red, white and blue uniforms but, for reasons unknown, the Victorians took to the field with each player wearing his own club uniform instead of the new state jumpers.

The Argus [11-7-1890] reports: "The jumble of colours - each man playing in his own club colours, with the exception of the white knickerbockers - had rather confused the Victorians, and several times they had managed in this way to give little marks to the wrong men".

To put this in perspective, here is a description of the various VFA club colours on display in this match:

September 24 - VFA vs Essendon (not shown)

An end-of-season exhibition match between Essendon (the 1894 VFA Premiers) and a representative team comprised of players from the other VFA clubs (except Geelong).

The players on the representative team wore their own club uniforms, leading to a number of turnovers throughout the match.
1897

For these contests the VFA again wore their intercolonial design of 1890-1892. This first match, played at Richmond's Punt Road Oval, is notable because both teams wore numbers on their backs, and a special card was printed featuring each player's name, number and position on the field. The cards were sold for a penny each outside the venue. [The Coburg Leader, 24-6-1905, p.4]

In the years prior to this match the use of jumper numbers had only been trialled on a handful of occasions:
Donald McDonald, reporting in The Argus under the nom de plume of "Observer" noted: "The plan of numbering the players for identification was tried. It was all right [sic] against the royal blue uniforms of the Victorians, but the black and white numbers were jumbled up, and lost in the black and white stripes of the South Australians". [The Argus, 26-6-1905, p.9]

For the return match played in Adelaide the teams reverted to their standard numberless uniforms.

Jumper numbers would not officially return at the top level until the 1911 National Carnival, then later that season during the 1911 VFL finals series. In 1912 both the VFL and the VFA mandated the permanent use of numbers on all club jumpers (for more on this topic refer to Trevor Ruddell and David Allen's article Centenary of Numbers [The Yorker, Issue 45, Spring 2011]).

Caps - through to the late-1890s it was common for players to wear caps on-field as part of their official uniform but by 1905 this practice had largely died out.

Team photos of both VFA representative teams in 1905 clearly show each player wearing a royal blue cap. However, action photos from both matches confirm the caps were not worn on-field; for that reason they have not been included in the uniform designs shown on this site.
1906

In 1909 the VFA representative uniform was modified; the navy blue trousers were replaced by three-quarter length white knicks, and the jumper cuffs and sock-tops were changed to gold.

This would remain the VFA's standard uniform for the next 20 years, with the exception of 1921 (see tab at left).

Season 1912 saw the introduction of jumper numbers for all VFA clubs. The representative team followed suit with large gold numbers replacing the sash on the rear of the jumper.

Due to the First World War the VFA ended their 1915 season early and went into recess during 1916-17.

However, the players re-united for this one-off exhibition match between North Melbourne (1915 VFA premiers) and a combined VFA representative side comprised of players from the other association clubs.

The match was a fundraiser for former South Melbourne and North Melbourne player Harry Todd who had lost his hands in a workplace accident. Players on both sides were reported to be out of form having had no football for a year.

It remains unknown what uniform the VFA team wore for this match.
1921

The VFA and VFL finally brought an end to their hostilities, signing a permit agreement that cleared the way for player transfers between both competitions. After years of acrimony the league also agreed to play the association for the first time since 1902 with the proceeds going to charity.

The VFA wore a modified version of their 1909-1927 uniform, switching from a blue turtle-neck to a button-up v-neck with gold collar.

The shorts changed from the three-quarter-length knicks of the previous thirty years to the new style which had been adopted by VFA and VFL clubs during the late-1920s.

A unique, "swirled" number font was also introduced for this match but was not seen again after this match, replaced by the traditional footy font.

The VFL had been playing regular interstate matches against New South Wales since 1920 but were unable to send a team to Sydney in 1931. The NSW league approached the VFA to take the VFL's place but this required ANFC approval because the VFA was not an affiliated competition.

Initially the ANFC refused to approve the match because of the VFA's non-affiliation and because their playing rules were not in strict conformity with the ANFC laws of the game.

However, when the VFL decided not to vote against the game on the basis that it would improve football in NSW, the ANFC subsequently allowed the match - on the condition it was played under their national rules. [SMH 10-6-1931, p.15]

For this match the VFA broke with tradition, ditching their gold sash which had been part of their representative uniform since 1890, and replacing it with a blue and gold version of the uniform worn by the VFL in their match against the VFA two months earlier.

The VFA confronted the VFL at Princes Park on the King's Birthday Holiday and were unlucky to lose a hard-fought match by 8 points.

Matching uniforms - for this match the VFA and VFL wore an identical V, with their respective colours the only variation between the two sides. This remains the only time in top-level interstate/representative Australian football when both teams wore matching designs.

An exhibition match held to increase regional interest in the VFA, and played on a Monday public holiday.

Egan was the BFA's best player and Brokenshire kicked 10 goals for the locals.

To date, it remains unknown what uniforms the VFA representative team wore for this match.
SPONSOR PATCHES

The VFA was the first of the top-level Representative/State teams to place their official logo on their representative jumper. The 1950  logo seen below also appeared in 1951, but only on the jumpers of the captain and vice-captain. From 1952-on all players in the Combine wore the same logo.

The VFA was also a pioneer on this front, becoming the first Representative/State team to have a sponsor patch on their representative jumper. In comparison, no sponsor appeared on the Victorian state jumper until 1986 (even though the VFL-AFL club jumpers had sponsor patches since 1977). 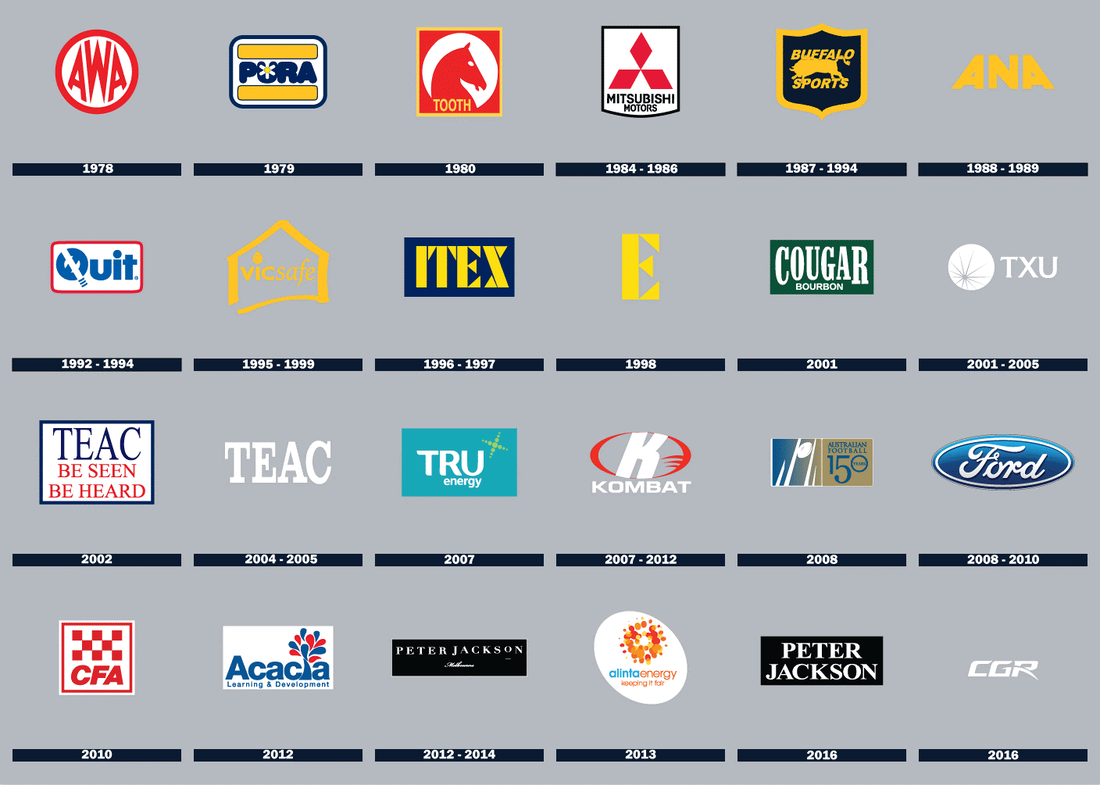 Click on the tabs to discover the story behind each design...