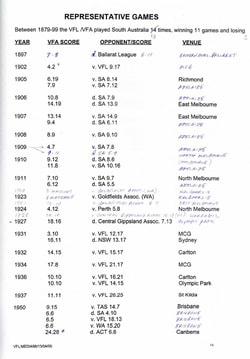 The VFL Media Guide page that sparked my interest
This website is the result of over 10 years spent trawling through microfilm at the State Library of Victoria (SLV) and countless hours online searching the Trove and Google News digital newspaper archives, as well as the SLV's digital archive of the Football Record/AFL Record. It was born through a simple desire to get things right.

Back in 2000, a contact sent me a copy of the VFL Media Guide for that season which contained a list of "every" VFA/VFL representative match since 1897 (see right for a scan of this document, and click to enlarge). Not only did it omit arguably the most important period of 1879–1896, when the VFA was the governing body of football in Victoria, but it was staggering just how much information was missing from the recent past. It was only later that I would discover how many mistakes existed in the information that was there.

​Around the same period, I stumbled on an old copy of the VFL Year Book from 1983, and some of the information within didn't quite fit what I'd read in the Football Record and other sources. In fact, some information seemed to be missing completely, such as Victoria's captain in the two games against WA in 1929. The other representative games of that season were shown yet no mention was made of Carlton's Horrie Clover leading the state on the tour of WA – thus denying Clover recognition for his only games as Victorian captain.

This led me to the State Library of Victoria's microfilm collection where a search of old newspapers started to expose further cracks. A search of the SANFL Book of Football Records (1990 edition) found even more. To be fair, Dion Hayman's book is an excellent resource but, as with so many other football books, it's what is missing rather than what is there that brings it undone. Research quickly showed that the list of South Australia's interstate team leaders was missing the names of at least five captains and a coach.
I was continually frustrated at the footy history that should be freely available, but simply couldn't be found. Even more frustrating was the fact that digging for information tended to reveal problems with what had long been accepted as fact. However, despite amassing a mountain of information, a move overseas in 2010 put an end to my days of searching microfilm at the State Library and the project was temporarily shelved.

It was the launch of the National Library of Australia's website Trove that made this site a reality. Their digitisation of old newspapers has made it possible for football fans like myself to delve deeper into the game's history, regardless of where we are located. Australian football's history is now being steadily updated and revised as more fans develop an interest in the past.

A recent example is the discovery by "Supermercado" (owner of the Demonwiki site) that Len Incigneri was Melbourne's coach in 1914, not Alex Hall as official sources had maintained. His research has revealed Hall was actually coaching Williamstown that season; the official Melbourne FC website has since acknowledged that fact. Numerous examples of fact being fiction have emerged in my research, and no doubt, in the research of other football historians utilising Trove and the Google News archive. It is my hope that in time, Hard Ball Get will become a trusted source for football fans to visit when they seek accurate historical information about our great game.
​​
ABOUT THE AUTHOR
ACKNOWLEDGEMENTS
SITE CREDITS
COPYRIGHT NOTICE
DISCLAIMER
ABOUT THE AUTHOR
David Eastman is a lifelong footy fan who detests roller-coasters yet chose to support the Melbourne Football Club. Throughout the torment of recent seasons he has drawn comfort from childhood memories of watching Robbie Flower soaring elegantly over a pack. Prior to relocating overseas in 2010 David could often be seen at the MCG, turning away from the scoreboard while uttering the mantra: "everything's zen".

He is also a freelance writer and editor whose work has been published in print and online. Having researched the history of Australian football for over a decade, he has contributed to the popular footy websites FootyJumpers.com and Full Points Footy; this site marks his first foray into the shadowy and coffee-fuelled world of web design.

ACKNOWLEDGEMENTS
This website is the result of over 10 years spent trawling through microfilm at the State Library of Victoria (SLV), and countless hours online searching the Trove and Google News digital newspaper archives as well as the SLV's digital archive of the Football Record/AFL Record.

I am greatly indebted to three people in particular:
SITE CREDITS
The site itself would not be possible without the assistance of a large number of people, my thanks to all of them and apologies in advance to anyone I've missed on the following list:
LIST OF SITE CREDITS

This website and its content is the copyright of the author, David Eastman, and is not licenced under Creative Commons licencing.

You may download, display, print and reproduce this content for your personal or non-commercial use but only with the copyright and authorship expressly acknowledged.

You may not, except with the author's express written permission, distribute or commercially exploit the content. Nor may you transmit it or store it in any other website or other form of electronic retrieval system.

This site also contains reproductions of, and links to, a wide range of published resources which do not belong to the author and are not covered by his copyright notice. If you wish to use material that is owned and/or managed by others then you will need to seek their permission to do so.
DISCLAIMER
​Whilst every effort is made to ensure the accuracy of the information contained in this website, no responsibility is accepted for any errors of fact. However, the author will attempt to correct mistakes and/or provide clarification when required.

Images of the AFL, VFL, SANFL, WAFL, and other leagues, and their associated football clubs, are used throughout this site to illustrate the history of the game, its teams and its players, and are not being used for commercial purposes. Such logos and images are the registered trademarks of their respective owners and Hard Ball Get makes no claim to ownership of these logos and images.

Unless otherwise indicated, all opinions expressed on this website are those of the site author.