There were three different awards presented to players in the VFL-AFL Reserves competition:
An explanation of each award, a list of winners and top three placings can be found below...

Awarded to the Reserve Grade's Best & Fairest player as voted by the field umpire(s). The medal was donated each season by Frank W. Gardiner, who was president of the League Seconds from 1925 until the 1940s. After his death, the VFL continued to award the medal to honour his memory and years of service.

First awarded in 1926, two years after the introduction of the Brownlow Medal, the award initially followed the same voting structure as its senior counterpart; one vote to the best-on-ground player would be awarded by the field umpire in each match. With (at least) two ties for the medal in its first five seasons, this method of voting proved ineffective and the Gardiner Medal would follow the Brownlow's lead by adopting a 3-2-1 system from 1931 onwards. This format remained until the award's demise following the conclusion of the AFL reserves competition ahead of the new millennium.

A player winning the award multiple times was rare, such is the nature of the reserves competition that one was likely to be promoted to the seniors if they played well enough on a consistent basis; this also explains the comparatively lower winning vote tallies compared to the Brownlow. Only Hec Davidson (1932 & 1933), Doug Davies (1950 & 1955), Tony Liberatore (1986 & 1988) and Rod Keogh (1990 & 1993) were multiple winners. In Davidson's case, he has still never been officially recognised for either victory due to oversights in the league's historical records.

Keogh, along with Darryl Schimmelbusch and Bob Heard (tied 1977 winners), shares the record for the most votes polled in a season: 23. Essendon's Peter Filandia also polled 23 votes in the 1992 season, seven votes more than the next best, but was ineligible due to suspension. He was the only player ever to top the Gardiner Medal tally but not win the award (other than those that originally lost on a countback).

The Gardiner Medal faded into obscurity during the later years of the AFL Reserves competition and details are scarce. Hard Ball Get now brings to light a wealth of new information that has never before been seen on the internet, returning the recognition to the players who never fully received it.

(details of Liston Trophy winners can be found here)

In 1928 and 1930 two players finished with the same number of votes and Gardiner decided to present more than one medal. In 1931 a countback system was introduced to prevent a tie for the award. If more than one player topped the voting, the medal was presented to the player with the most best on ground votes (known as "1st votes" in the preference system used in early years, or "3 votes" under the 3-2-1 system used in later years).

Countbacks were required in 1932, 1933, 1950, 1958, 1970, 1977 and 1981.
In 1981 Malcolm Reed (Geelong) lost under this system to Darryl Vernon (Richmond). The countback system had been scrapped for the Brownlow Medal in the weeks prior,  so the VFL decided to apply the same amendment to the Gardiner and Morrish Medal voting, bringing Best & Fairest voting in all three grades into line. As a result, Reed retrospectively received his Gardiner Medal a week after the count.

In 1992 the AFL announced retrospective medals would be presented to all players who originally tallied the same number of votes as the winner but lost on a countback. The following players received their retrospective Gardiner Medals in April, 1992:

*The AFL website and Media/Stats guide note that restrospective medals were awarded to players who lost on countback but O'Halloran is shown as winning in 1951 (instead of 1950) and Heard for 1971 (when he played for Collingwood) instead of 1977 (when he played for Richmond). See the Discrepancies in Official Records section later in this article.
1932
Albert Logan (Hawthorn) and Hec Davidson (Melbourne) tied on 13 votes but Logan won on countback on account of playing only 10 reserves games for the year, while Davidson “only missed four”. 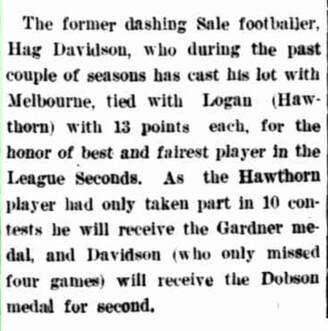 The Gippsland Times (12-9-1932)
1933
In 1933, Findlay and Davidson tied with Hawthorn's Ernest 'Tich' Utting on 15 votes but Utting received the Gardiner Medal because he had four 1st votes compared to Findlay's three and Davidson's one. 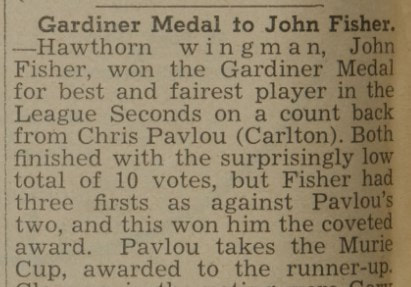 NOTE - AFL Records have Bob Heard receiving a retrospective medal for a loss on countback in 1971 (when he played for Collingwood).
It was actually for 1977 when he was playing for Richmond - please refer to the Discrepancies section at the base of this page for more info.

The following players have won multiple Gardiner Medals (but only three of them have received their due).

Awarded to the player finishing second in the Gardiner Medal voting.
The medal was donated each season by J. N. Gordon and G. Dobson, who were joint vice-presidents of the League Seconds from 1927 to 1938.

1934 - Percy Streeter (Footscray), Hec Davidson (Melbourne) and Frank Gibson (Fitzroy) tied but the Dobson medal was awarded to Streeter as he had played the least number of Seconds matches that season.

1936 - Norm Honey (Richmond), Keith 'Bluey' Truscott (Melbourne) and Stuart Stewart (Hawthorn) tied for 2nd but the medal was awarded to Honey on a countback.

Val Murie was joint vice-president of the League Seconds throughout the 1930s and '40s, and later took over from Frank Gardiner as president. Murie donated an award in 1939 for players finishing second in the Gardiner Medal voting. This replaced the Gordon-Dobson Medal.

Note that between 1939 and 1941 there are numerous reports of this new award being the Murie Medal. The awarding of a cup is confirmed from 1942 onwards.