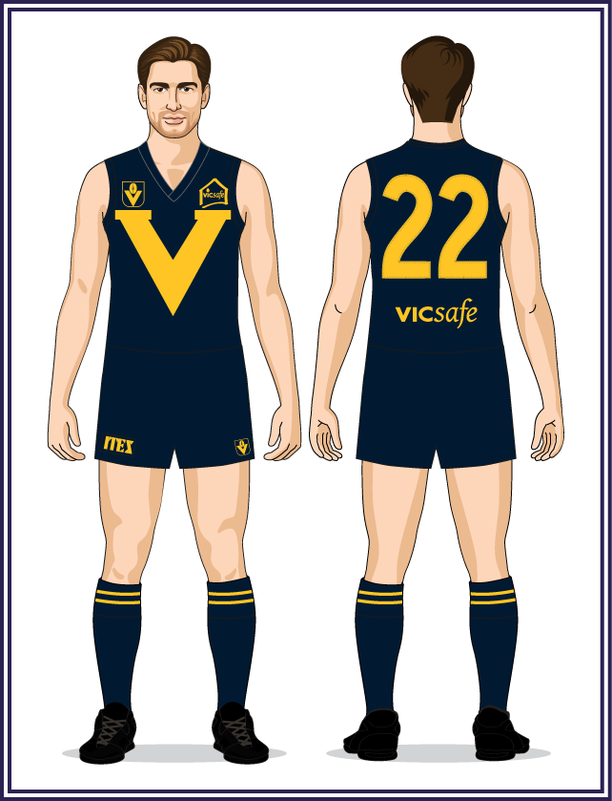 1996 vs TFL
1997 vs ACTAFL
The 1996 season saw the VFA, now under the control of Football Victoria, officially renamed the VFL.

The symbolism of such a move was unmistakable. The old VFL (itself renamed the AFL in 1990), had defeated the VFA at the turnstiles long before, but by re-branding the Association with the very name it had fought against since the bitter breakaway of 1896-1897, the VFL-AFL finally claimed the symbolic victory they had sought for a century. 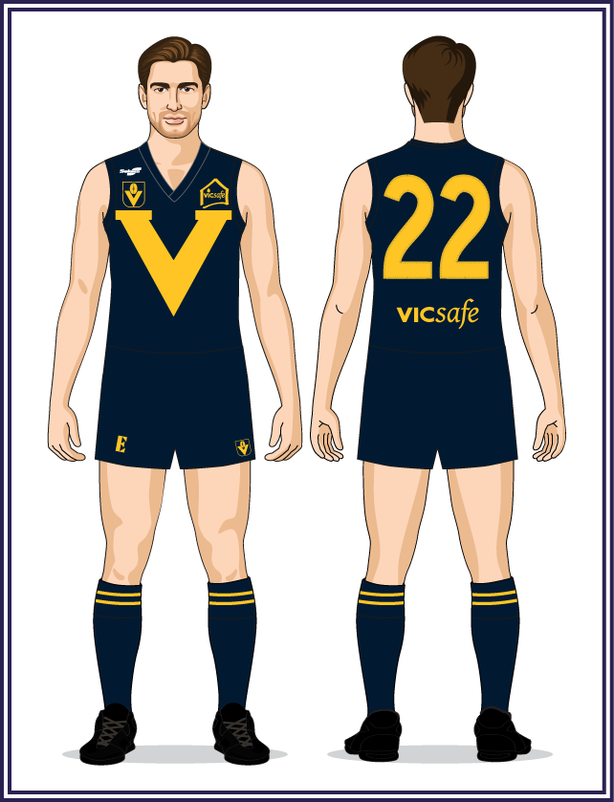 1998 vs TFL
- a small Sekem apparel sponsor patch was added to the top left of the jumper front.
- shorts sponsor ITEX was re-named "E" in 1998 and the shorts patch was changed accordingly. 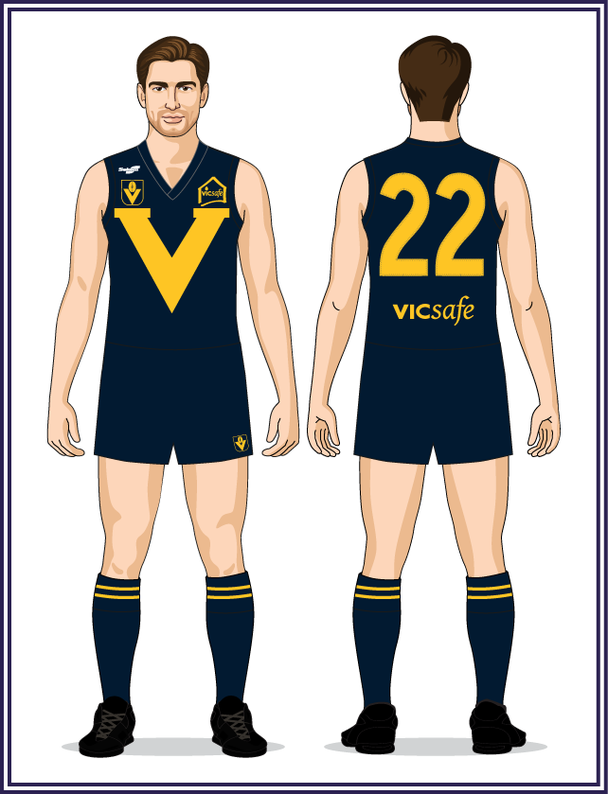 1999 vs SANFL
This match against the SANFL was a curtain-raiser to the Victoria-South Australia State of Origin match.
The VFA-VFL uniform was nearly identical to 1998, the only change being the removal of the shorts sponsor. 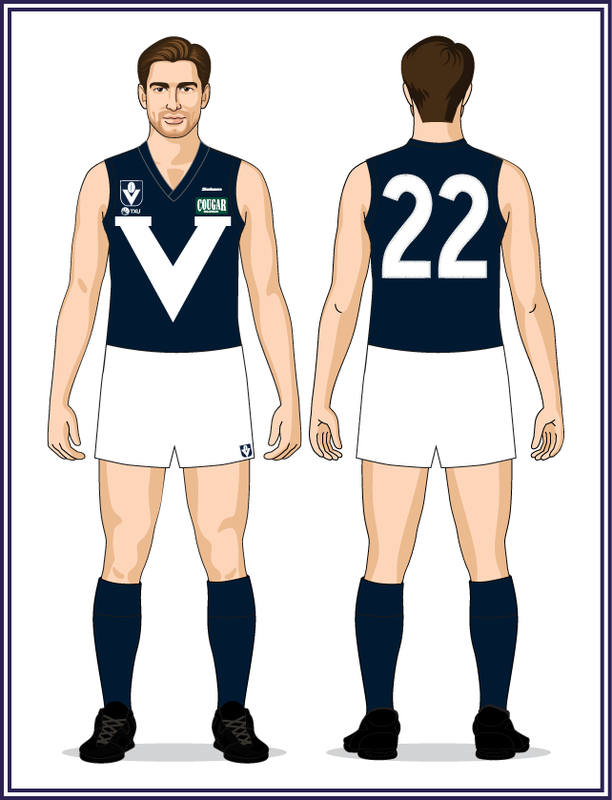 2001 vs SANFL
The demise of State of Origin football in 1999 meant the iconic Victorian jumper worn by VFL-AFL state sides since 1950 was no longer in use. This created an opportunity for the VFA-VFL representative team to adopt the famous big white V of their former rivals and make it their own. 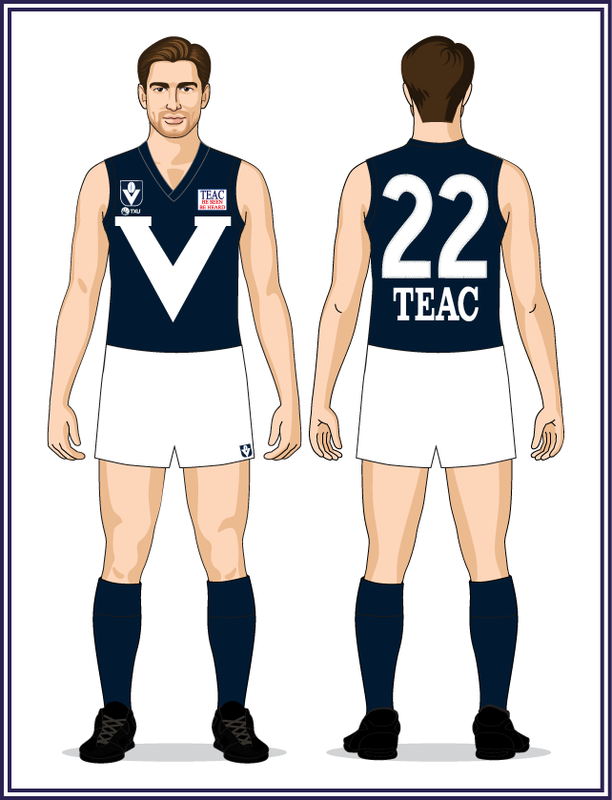 2002 vs SANFL
Port Melbourne's jumper sponsor, TEAC took over as sponsors for the VFL representative team in 2002.

Author's note - the TEAC slogan on the jumper front reads: "Be Seen. Be Heard." Ironically, it took nearly three months of searching various sources to finally decipher the wording on this (almost) impossible-to-read sponsor patch! 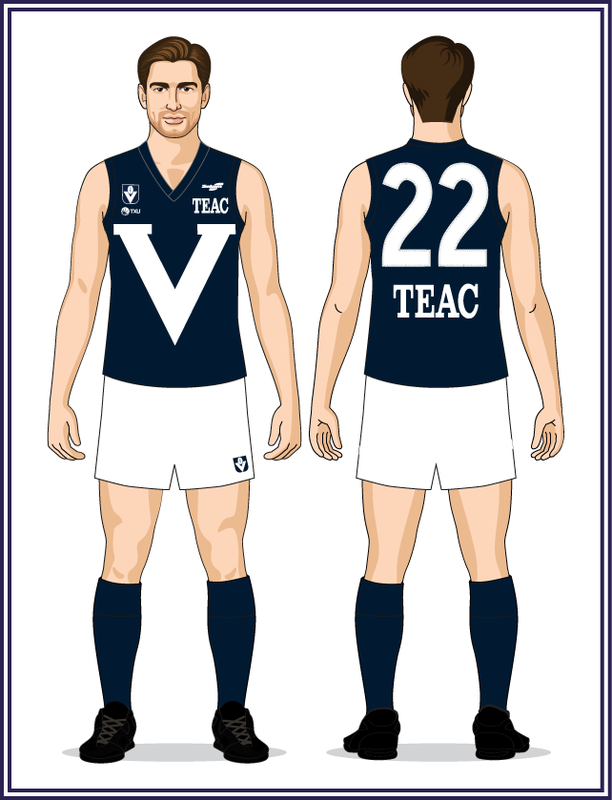 2004 vs WAFL
2005 vs SANFL
This was the first of the modern-style jumpers designed to be worn over the shorts rather than tucked into them. The other main design change was the move from the "chunky" Big V of 1961-1975 to the classic Big V worn by VFL-AFL state teams from 1950-1960 and 1976-1999
(NOTE - the V on this jumper was the classic shape but, due to the longer jumper, was much larger than those ever worn by the VFL-AFL). 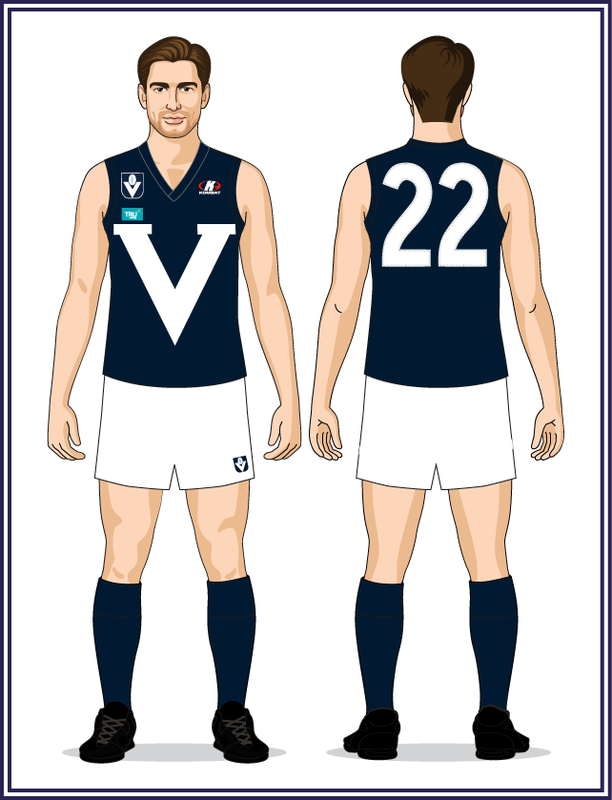 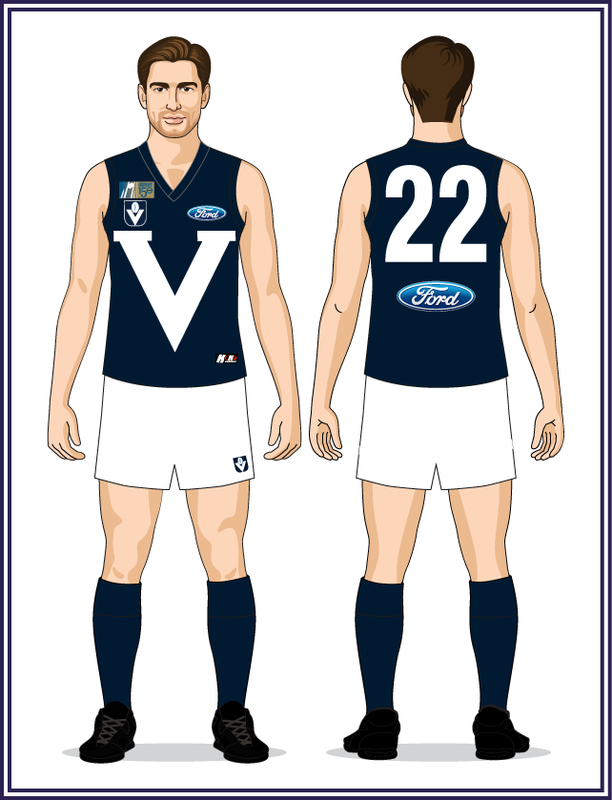 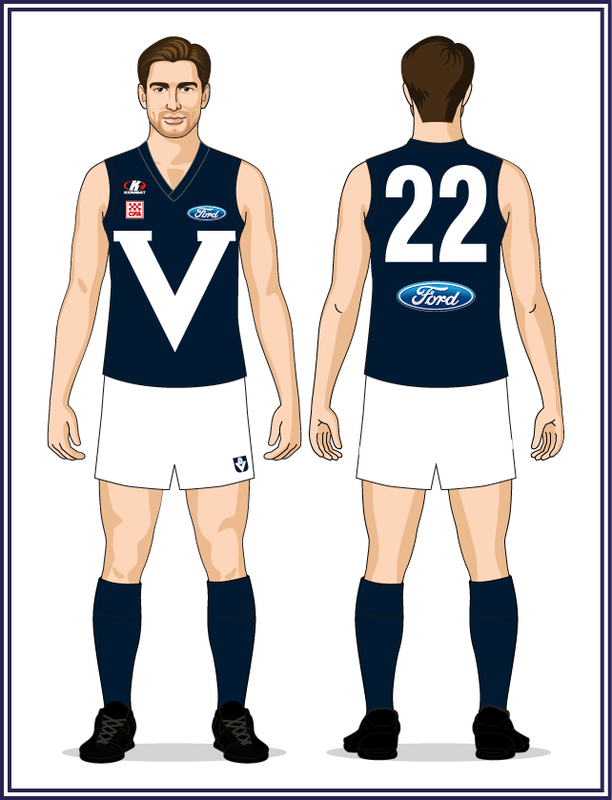 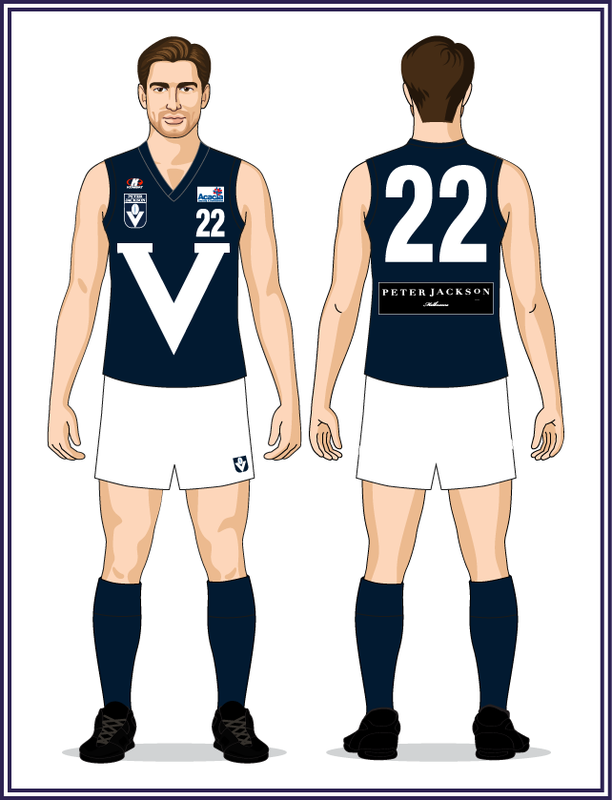 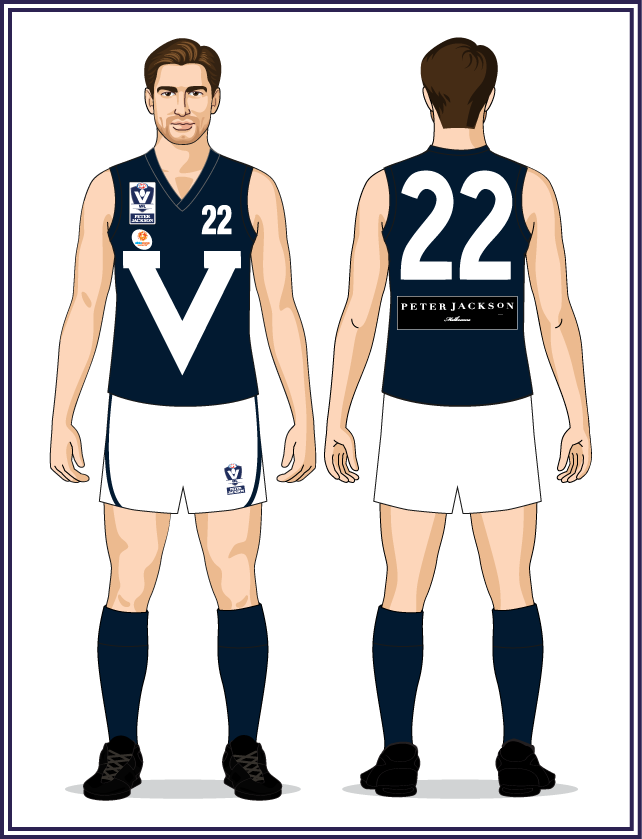 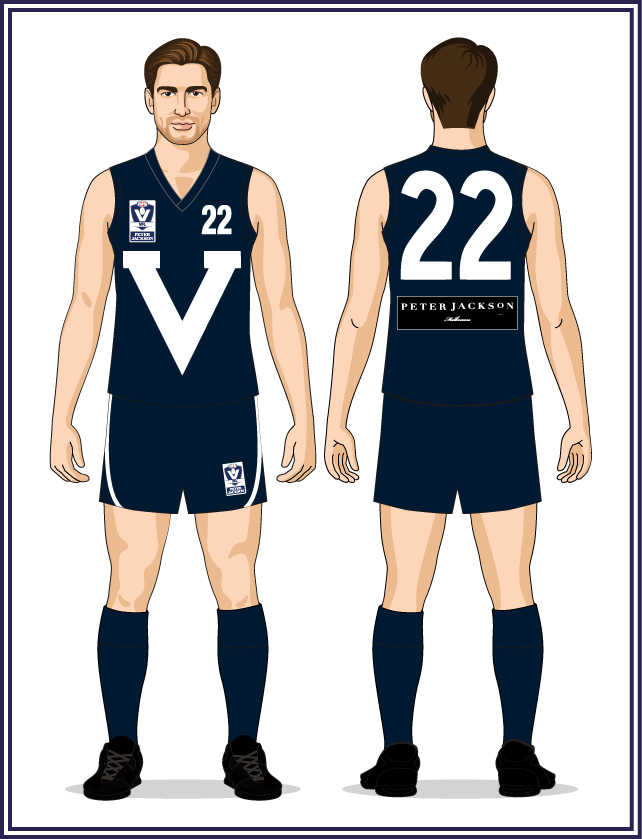 2014 vs SANFL
(L) no sponsor so the AFL Victoria-PJVFL patch was moved lower, parallel to the front numbers.
(OTHER) shorts changed to navy blue with white bands (first navy blue shorts since 1999). 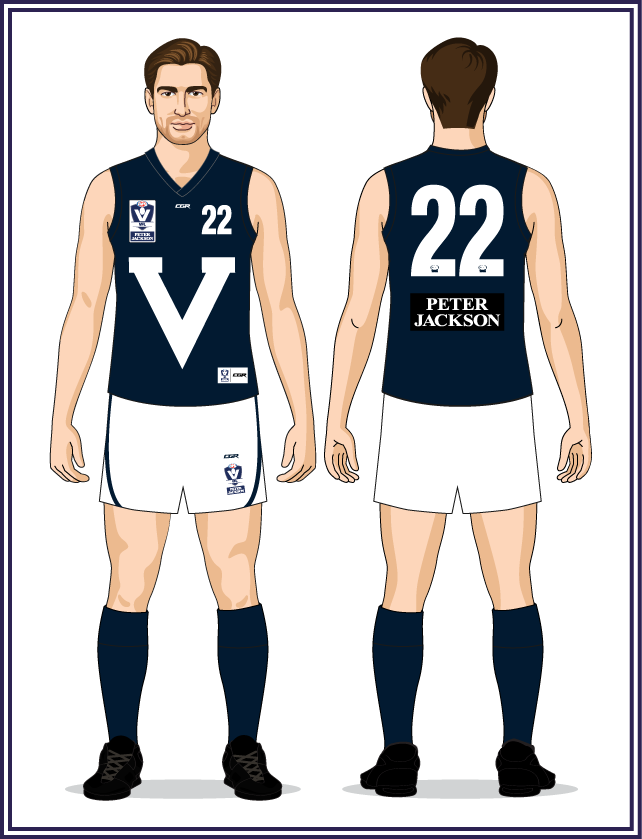