By mid-1929 a renewed push for all South Australian sports to adopt a uniform set of representative colours was underway. The first effort in 1907-08 had seen most sports trial the chocolate brown and turquoise blue but by 1929 only Australian football and hockey had persisted with this colour scheme and the State cricket team had steadfastly refused to give up their use of red, black and yellow.

On May 27, 1930 a preliminary conference was held with all but the Cricket Association represented. A second meeting took place on Tuesday, June 17 at the SANFL offices with all sports, including cricket, voting unanimously to adopt a combination of red, navy blue and gold. A secondary motion that all blazers should bear a badge featuring a magpie was rejected. [The Advertiser, June 18, 1930, p.15]

Delegates from various South Australian sporting bodies meet to decide the State's new sporting colours (The Register, 18-6-1930)
The front cover of the Register News-Pictorial [10-7-1930] featured a photo of SANFL Secretary, Frank Marlow unveiling a prototype of the new South Australian jumper to be worn at the 1930 National Carnival (it was this design that Adelaide Football Club used as the source for their 2005 Heritage Round jumper).

The actual jumper worn at the Carnival featured some minor variations to the prototype:

New socks were introduced as well and, unlike the jumper, the design was long-lasting; surviving until 1946. 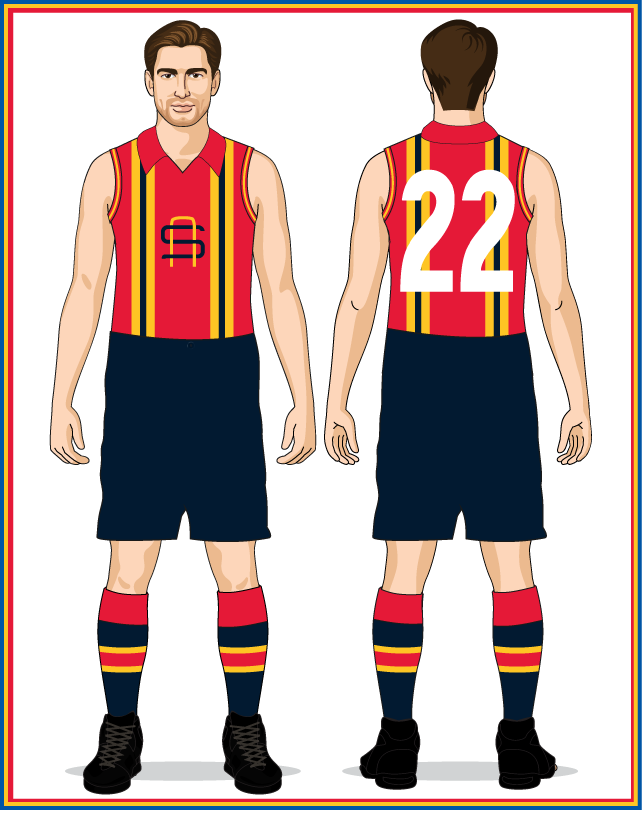 The general consensus after the 1930 Carnival was that the new colours were a good choice but the design of the jumper itself still needed work. A correspondent in the Advertiser and Register [19-6-1931, p.6] noted: "The best method to adopt in selecting a uniform is to aim at simplicity of design, distinctiveness--something that will contrast with the uniforms of the other State teams--and neatness."

On that criteria the 1931 design certainly passed the test for distinctiveness, but in regards to simplicity of design... not so much. As with so many South Australian jumpers of this era the designers went overboard, on this occasion pairing candy stripes at the shoulders with a pair of braces that looked more like GT racing stripes later seen on Holden Monaros and Ford Falcons at Bathurst in the 1970s.

The response from the South Australian footballing public was immediate and overwhelmingly negative. During this era the SANFA was the seconds competition of the SANFL and their representative team usually wore the same uniforms as the seniors. However, the SANFA board disliked the new design so much they wrote to the SANFL seeking permission to design their own State jumper for their upcoming clash against Broken Hill in August. [Advertiser and Register, 8-7-1931]

Needless to say, Athlete's suggestions went unanswered but the News noted on July 9th: "The mingling of the red, gold, and blue... recently was not impressive and was much criticised". Marlow himself put out a public call via the media: "If anyone has a design in mind the league will be glad to consider it if a sample guernsey is submitted". [News, 9-7-1931]

No samples were forthcoming and the design remained unchanged for the South Australian's return match against Victoria in August.

A trend had emerged in South Australian football at this time with all SANFL clubs except Glenelg switching from jumpers to lace-up jackets. After the controversy of 1931 the State team followed the trend and the new design shown above was introduced for the 1932 interstate matches played in June and August.

At the League meeting on May 2nd West Adelaide's delegate asked whether samples and prices for jackets in the State colours should be obtained. Sturt's delegate suggested the League should adopt the Amateurs' 1931 representative uniform of navy blue jumpers, with red and gold monogram, red collar and facings. Norwood's frustrated delegate countered: "Can't we change the name of the State team to Chameleons?" He moved that the South Australian uniform design remain the same as 1931 and the motion was passed by nine votes to seven. [The Advertiser, 3-5-1932, p.10]

Team and match photos clearly show the new design pictured above, so at some point between that meeting on May 2 and the first interstate match on June 11 this decision was overturned and a new design and lace-up jackets were adopted. Note that in both games some players wore long-sleeved jumpers underneath their sleeveless jackets.

For the 1933 National Carnival the South Australians adopted another new design and continued to wear lace-up jackets. This was the first of the red, gold and navy blue uniforms to last more than one season!

General dissatisfaction with the application of the new colours continued. At the SANFL general meeting on June 10, 1935 delegates chose to revert to jumpers after three seasons of jackets and a sub-committee was appointed to "consider whether an improvement in design could be effected". [The Advertiser, 11-6-1935]

The sub-committee again bypassed simplicity of design in favour of a motley mix of ideas that included gold braces (as previously seen on the failed 1931 design) and a striped collar. The search for a long-lasting South Australian State jumper was destined to continue into 1936.

As with previous seasons a handful of players wore long-sleeved jumpers under the official, sleeveless uniform.

On June 25, 1936 it was announced in the Adelaide press that the SANFL had chosen yet another design for the South Australian team. This was the sixth design in seven seasons since the new State sporting colours of red, navy blue and gold had been adopted and finally the SANFL had got it right... only they didn't know it.

After so many failed designs the league administration continued to second-guess themselves and just two days after releasing details of the 1936 uniform they announced a month-long knitting competition to find a new design! The competition was to be run in conjunction with The Mail newspaper and offered readers the chance to design the future State jumper.

The Mail (27-6-1936)
The following information was provided to the budding designers:

"Many women who have seen the State team filing on to the oval, have wondered why the combination of red, blue and gold could not have been used to better advantage in providing a jersey worthy of the South Australian team. Designers have puzzled their brains to produce a more striking jersey, but the unfortunate result of their efforts is demonstrated in the fact that no fewer than five designs have been made in six years. [NOTE - it was actually  six in seven years... but who was counting at this point!]

One year, when the men took the field in Melbourne, there was a shout of laughter from the crowd, and cries of "Pretty Joey" pursued the players.

The latest jersey... will be more attractive than others which have preceded it. There is, however, room for improvement, and The Mail, with full faith in the artistic minds and clever fingers of its women readers, is offering a prize of £5 for the best design to be submitted. The winning design will be considered by the South Australian Fotball League, and if it is approved it will be adopted by the State team next year". [The Mail, 27-6-1936, p.2S]

The following week's edition of The Mail adds:

"In South Australia the question of a jersey has become quite a sore point among the footballers and it is felt that only a woman with an eye to the combination of colour can solve the problem". [The Mail, 4-7-1936, p.2S]

Thankfully for football in South Australia, and generations of football fans in other States who have admired the classic South Australian uniform from afar, the following statement appeared in The Mail's August 8th edition:

The 1930s proved a key decade for State football jumpers with Victoria wearing the first version of their classic Big V in 1931, Western Australia wearing their first gold jumpers with a black swan in 1935, and South Australia adopting a red jumper with a navy blue and gold vee in 1936.

In 1937 a long-sleeved version was added, preventing players from wearing long-sleeved jumpers under the official uniform as had frequently occurred since the first sleeveless jumpers were introduced in 1923. 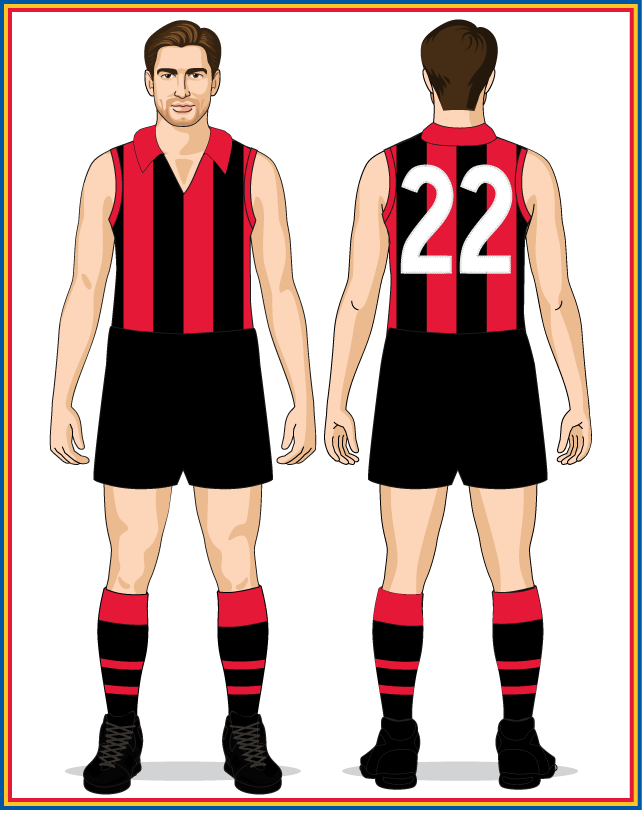 However, due to wartime rationing the materials required to produce new State jumpers were not available so the SANFL were forced to use borrowed club jumpers instead. During the war years the eight SANFL clubs had merged to form a four-team competition contested by:


So this provided the SANFL with the choice of three remaining sets of club jumpers that had been in storage since 1941. Norwood's jumpers were too close to the Victorian RAAF jumpers so the SANFL selected West Adelaide's black and red striped kit (this decision meant the Norwood and West Torrens jumpers were the only ones not seen on-field during the 1941-44 period). 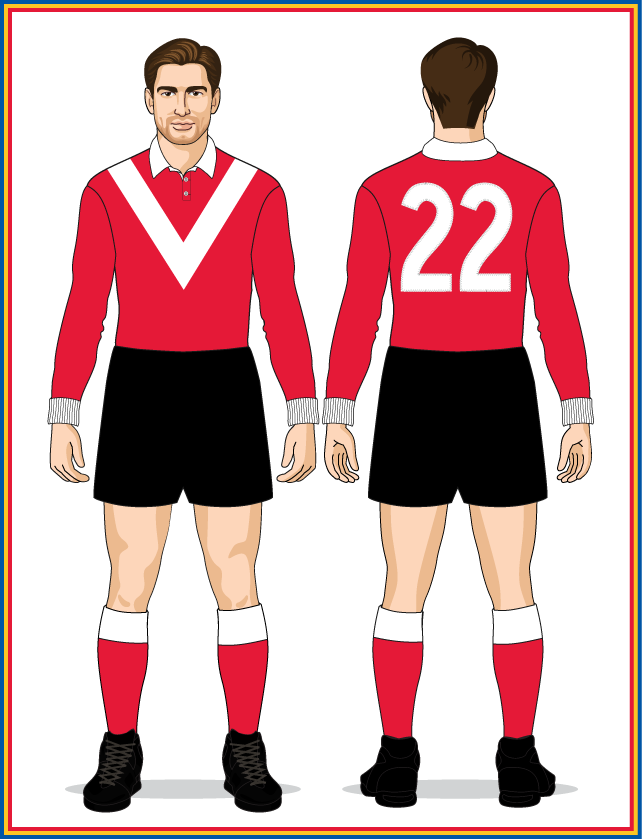 Although the war had ended rationing was still in effect when South Australia faced Victoria on July 7 at Adelaide Oval. With no possibility of producing new State jumpers, the South Australian side wore a borrowed set of North Adelaide uniforms for the big match instead. The V running from the shoulders to the middle of the jumper clearly impressed the Victorians, as they switched to this style of V on their State jumpers for seasons 1946 and 1947.

South Australian XVIII vs Richmond
South Australian XVIII vs Victorian RAAF
These two end-of-season exhibition matches were not official representative matches and only featured players from a handful of SANFL clubs. It remains unknown what uniform was worn by these teams.
NEXT PAGE:
1946-1978
RELATED PAGES:
SA UNIFORMS (HOME)
STATE UNIFORMS (HOME)