Queensland football received a massive boost in 1974 when the State won their first Section 2 national title. Following this success the Queensland uniform received a complete overhaul. Gone was the plain design of 1974, replaced by an impressive new design that returned the "Q" to the front and centre of the jumper via a QFL monogram. This was paired with an all-new sock design similar to that first seen on the Queensland uniforms of 1884-88.

- first appearance of the iconic QAFL logo on the State jumper.
- the logo of Queensland's apparel sponsor Peerless was also added to the jumper front.
(Peerless were better known at this time for manufacturing most of the rugby jerseys worn throughout Queensland and New South Wales).
- first collarless Queensland jumper.
- v-neck returned to standard width.
- white stripe dropped from the side of the shorts.

The first version of the sash design that for most modern fans remains synonymous with Queensland's interstate teams. The sole difference between the 1980/82 version and 1981 is the socks. In 1981 the classic design (worn for many years prior to 1975) made a brief comeback before the State team reverted to all-maroon socks in 1982.

This design was also the first to include American-football style numbers. These were later adopted in 1982 by all WAFL clubs and appeared on the 1983-84 Western Australian State jumper. 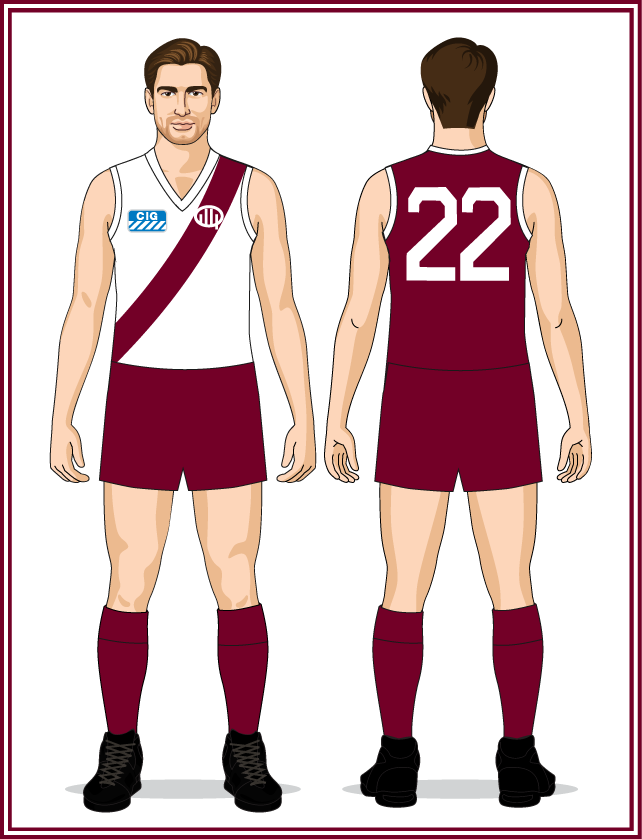 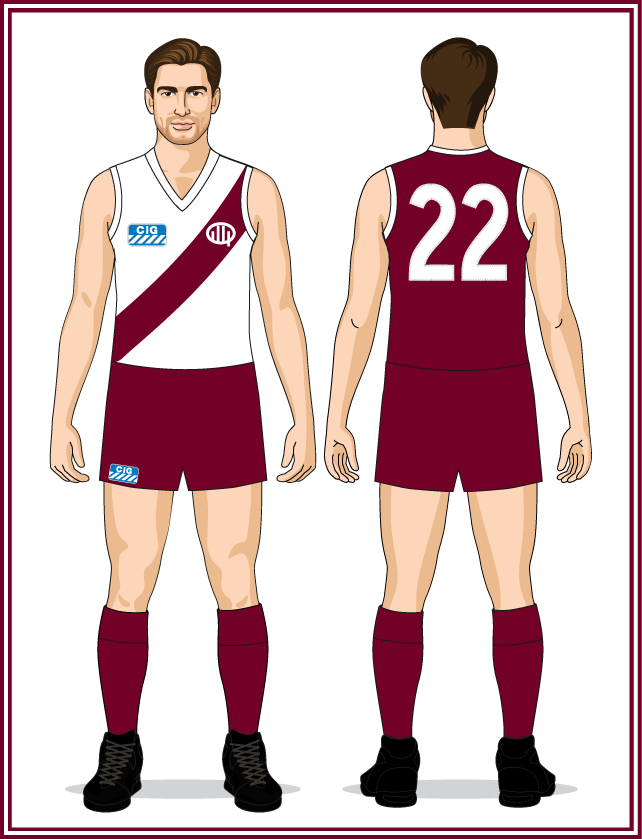 - the sash returned to the 1980-82 width but now finished lower at the top of the jumper
(it ended fully against the shoulder instead of between the neck and the shoulder).
- sponsor logo (CIG) worn on the shorts for the first time.
- rear numbers changed to standard footy font. 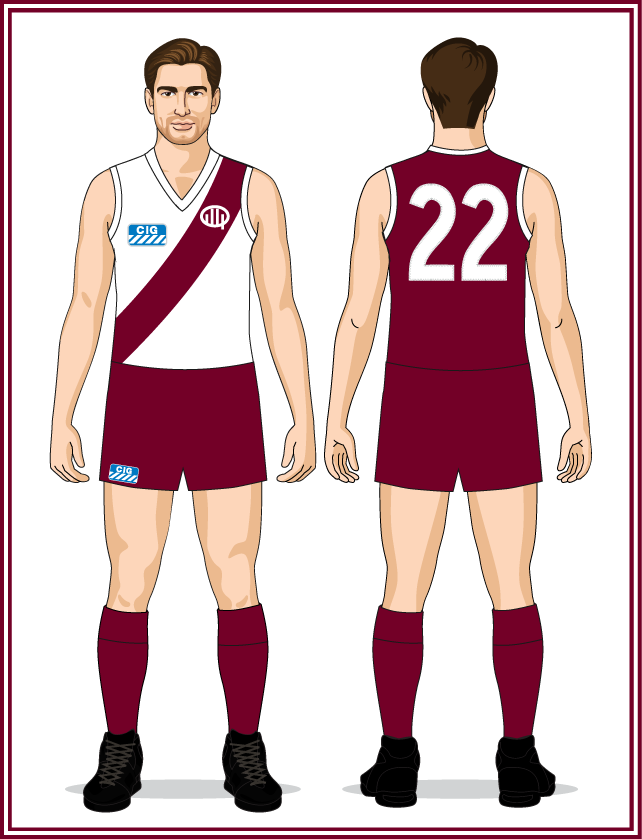 Return to the original 1980-82 sash placement (see below for a comparison of how the sash was worn throughout the 1980-89 era).

The following side-by-side comparison highlights the differences in sash width and placement throughout this era... 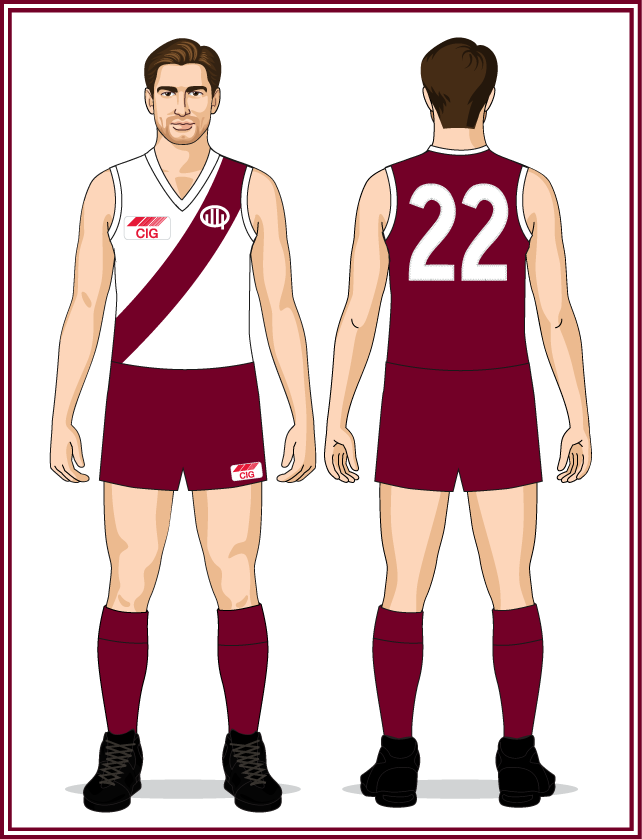 - the CIG sponsor patches were updated with the company's new logo and colour scheme.
- the shorts patch was worn on the opposite side of the shorts.

1991 Representative uniform
This representative match against the NSWAFL was played as a curtain-raiser for the State of Origin match.
The design of the uniform is known (maroon with white stripes - same as the Origin jumper) but the various sponsor patches on the jumper are not known.
Please contact me if you have any photos of this uniform.
1991 State of Origin uniform
Queensland celebrated their first Origin match since 1988 with a new uniform, reminiscent of Port Adelaide's famous "prison bar/wharf pylons" design.
For the big match against Victoria a Suncorp sponsor patch was worn alongside the QAFL logo. An AFL State of Origin patch appeared above the QAFL logo.

1992 Representative uniform
This representative match against the NSWAFL was played as a curtain-raiser for the State of Origin match.
The design of the uniform is known (maroon with white stripes - same as the Origin jumper) but the various sponsor patches on the jumper are not known.
Please contact me if you have any photos of this uniform.
1992 State of Origin uniform
The exact layout of the patches on this uniform are also unknown. It is known that the QAFL logo and the 1992 AFL State of Origin logo were worn but it remains unconfirmed if there was also a sponsor's logo on the jumper.

As with the representative jumper, if you have any further info please contact me.

A new composite jumper was designed featuring the maroon and white of Queensland and the ochre and white of the Northern Territory. In this author's opinion, the design fell just short of being an instant classic because of one simple design error - the white neck that clashes with the ochre and white vees. See the image above right for an idea of how perfect this jumper would have been if the neck had been maroon instead.

1994
The same uniform the QAFL wore for their clash against the TFL the previous season.
1995
The sponsor patch changed from Coca-Cola to Bank of Queensland for this representative match against the WAFL. 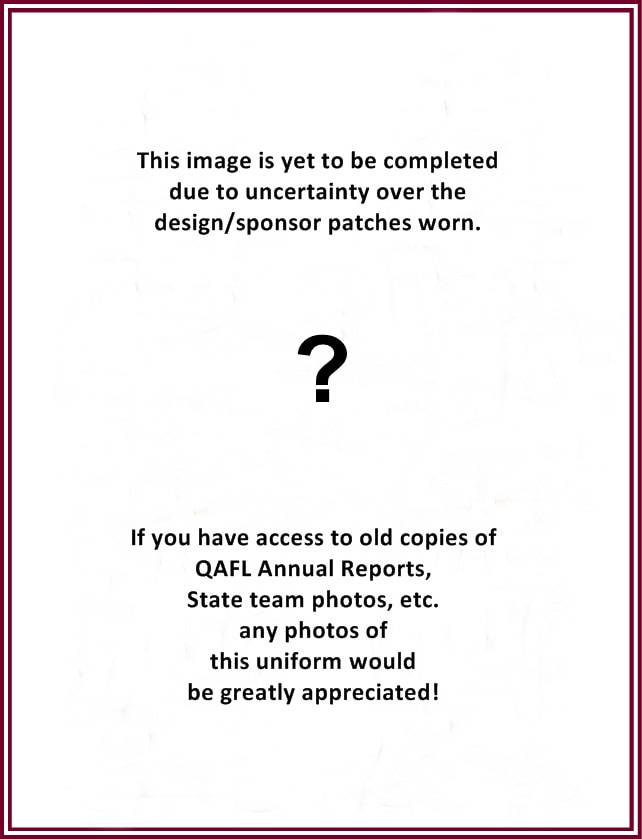 It remains unknown what uniforms were worn during this period, what patches appeared on the uniforms, even how many representative matches were played during these years!

I'm aware of the QAFL playing rep matches against the Victorian Metropolitan FL in 1998/99 but that's the limit of what I have been able to find. If you can provide further info please contact me.
NEXT PAGE:
2000-today
RELATED PAGES:
QUEENSLAND UNIFORMS (HOME)
STATE UNIFORMS (HOME)